This one I’m quite happy with!

Since I still had too many seashells, I decided to use them in a wreath.

I also had bought a frame to fill with seashells as well (didn’t finish that project yet, maybe that’ll be Part III!)

First, I just started off with the Styrofoam ring and placed some shells to fit together before gluing them. I started off trying to shove them together quite a bit before realized I could use smaller ones to fill in any gaps (that worked much better). 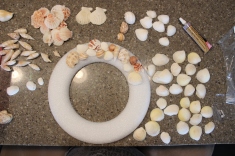 I forgot I had these TINY, baby shells too that I could use which worked so to fills those gaps!

I wasn’t sure how well the shells would stay on or how I could get them attached on the curved part of the foam so I opted to use some rope that looks somewhat nautical to use on the inside and outside. Just glued and wrapped it around!

Did the same thing to the outside as well. And used the tiny shells again to fill in the edges of the rope. Ended up using quite a few for that and I still wasn’t entirely thrilled that you could see the foam (also, those baby shells were quite frustrating to place).

I ended up putting some glue in places you could still kind of see foam and just dumped some sand on it. I was a bit worried that would ruin it somehow, but it actually worked out quite well!

I do get a bit impatient when working on crafts so I’ll try anything to make it easier. 😉

The end result! I still have to add a way to hang it up but I’m really happy with how it turned out! And it took quite the chunk out of my shell collection too which is great!

Pink, it’s not even a question 🌷
If you read this, you should start watching Legion. It’s available on Hulu. Kthxbai 💕
Sadie makes things interesting 💫
Curiosity leads to a friend
What we saying about slow mo OOTDs?
Mr. Robot but starring Sadie as Elliot
Loading Comments...
Comment
×
<span>%d</span> bloggers like this: